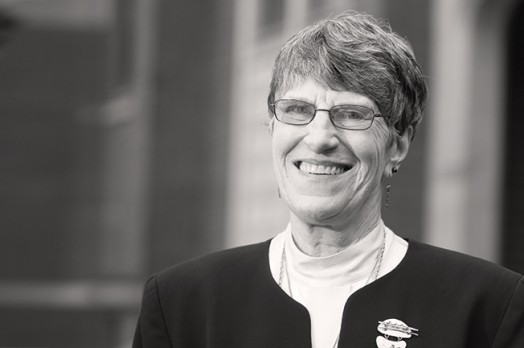 Initially, Peggy Smith ’64 didn't follow in the footsteps of her parents, Robbin K. Piety ’34 and Eugene A. Piety ’33, both of whom attended the College of Puget Sound. Peggy enrolled at Washington State University, but soon decided to return to Tacoma, and the College of Puget Sound, where she developed a passion for chemistry. Surprisingly, her chemistry classes were 50 percent women—a rarity at the time. She fondly remembers a challenge from one of her male classmates to make a dry battery. She succeeded, and was incredibly pleased.

Peggy's passion for chemistry led her to Minnesota and then San Francisco, where she earned her Ph.D. A single mother at the time, Peggy was extremely grateful for support from friends and colleagues throughout her educational journey. She recognizes that she received an excellent education, and that not everyone has the same opportunities. Peggy wanted to pay it forward.

For the past 31 years, Peggy has made gifts to the Puget Sound Alumni Fund, and served as a class agent to encourage fellow alumni to donate annually to the university. She's stayed actively involved in university events, including Summer Reunion Weekend and Alumni College.

After a long, successful career in government, Peggy began thinking about her legacy. She had one rule: put your money where your values are. For Peggy, that meant education (and jewelry). She recently made a deferred gift of a retirement plan designation through a bequest. Peggy's gift will ensure that generations of future Loggers will have access to a liberal arts education that will continue to shape them long after they graduate.

Peggy is proud that University of Puget Sound has continued to evolve and improve since her time on campus. She notes that the university is held in higher esteem nationally today, and hopes that her gifts have played a role in the university's advancement.